To celebrate the FIWC 2015 live qualification events that have been taking place throughout March, the FIFA Interactive World Cup on Facebook is giving away two copies of EA SPORTS™ FIFA 15 signed by Spain international and Chelsea defender Cesar Azpilicueta! 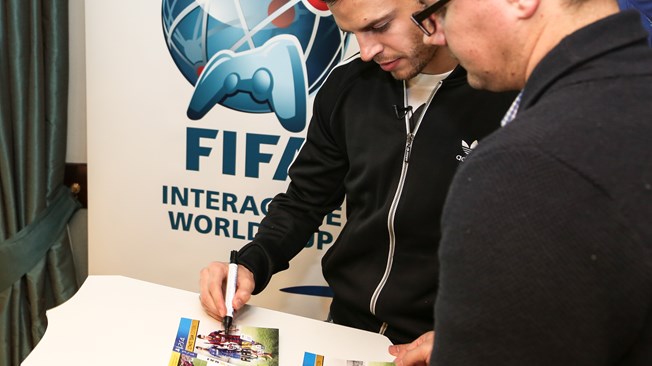 To enter our March contest simply follow the FIFA Interactive World Cup on Facebook and keep an eye on our updates. We will be publishing a contest question on the FIWC Facebook page soon. Two lucky FIWC fans that correctly answer the question will receive a prize!

Contest prizes
The two contest winners for our FIWC march Facebook contest will each receive a copy of EA SPORTS™ FIFA 15 (ultimate edition) for PlayStation®4 signed by Cesar Azpilicueta. Voted as Chelsea Players’ Player of the Year award for 2014, Cesar has become a key figure in Jose Mourinho’s team. Don’t miss out on this chance to own a copy of FIFA 15 signed by the Chelsea man and Spain international.

Munich is on the horizon! Season 6 of online qualification for FIWC 2015 is currently underway. Don’t miss out on your chance to qualify for the Grand Final in Munich. You could be just 90 matches away from securing a seat at the 2015 Grand Final, where 20 players will compete for USD 20,000 and a trip to the FIFA Ballon d’Or 2015.